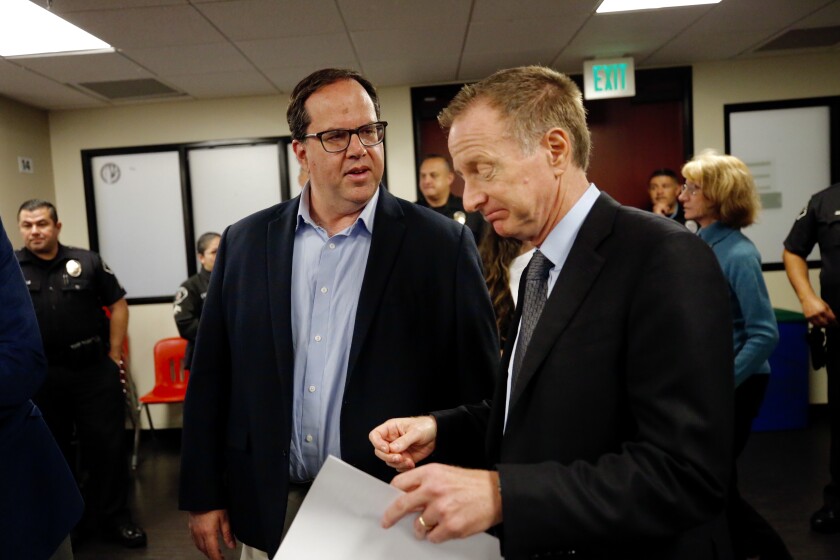 Los Angeles school officials were racing Sunday to organize the complex logistics of opening 20 meal pickup sites and 40 family resource centers to serve students who will be displaced from campuses beginning on Monday in an unprecedented shutdown to limit the spread of the coronavirus.

The food distribution sites and resource centers are widely seen as vital in a school system where 80% of students are from low-income households and 18,000 are homeless.

The centers, scheduled to open on Wednesday, are intended as a stopgap to offer food, childcare, counseling, health screening and educational activities in a system of nearly 900 campuses. District officials said Friday that they planned to release a list before the end of the weekend, but it wasn't clear Sunday night whether they would hit that deadline. An update from the teachers union said the list might not be available until Monday morning.

L.A. Unified is not alone in having to prepare quickly — and is likely ahead of the curve compared to some other districts.

For that reason, Gov. Gavin Newsom on Sunday declined to follow the lead of other governors and shut down all public schools in the state. Closing would be a local decision, he said.

So far, 24 of the state's 25 largest school systems, including Los Angeles Unified, have shut down, Newsom said. About 51% of all the state's school districts will be closed as of Monday, accounting for about 85% of the state's students.

That number increased by at least one on Sunday, when West Covina Unified announced that its schools would not reopen Monday "due to an individual at West Covina High School testing positive" for COVID-19.

The notification letter, sent to parents and posted on the district website, did not indicate whether the individual was a student or staff member, but it may be the first positive case recorded at a school in L.A. County.

"The individual is resting well at home under quarantine and is awaiting direction from the Dept. of Public Health regarding the notification procedures to others who may have been exposed," the district wrote in its letter.

Within L.A. Unified, the grandmother of a student at Larchmont Charter School has tested positive for the virus. School officials learned about the grandparent's positive test early Friday and sent a message to parents letting them know that its campuses would be closed, said Executive Director Amy Held.

Test results are pending for at least one other member of that family, she said in a Friday interview.

In Los Angeles, the nation's second-largest school district will be closed for at least two weeks with the centers intended to serve as a safety net for families with no other means to provide for their children. Most of the centers are likely to be at closed schools and will be open between about 6:30 a.m. and 6:30 p.m. As a precaution, all center visitors will have their temperatures taken with forehead thermometers upon arrival, and all students will be directed to wash their hands.

District employees who voluntarily sign up to work at these centers will receive a $100 stipend for each 6-hour shift in addition to their regular pay, which will continue.

Among the services being offered are: counseling and health services for students and families; "grab-n-go" meals for families and community members; access to books, computers and instructional materials; and options for some students to check out electronic devices and books.

Administrators, nurses, classroom teachers, security aides, school police, health and human services providers, counselors and custodians will be among those working at the centers.

"The district will try to assign our members a task consistent with their job, but it's important all members be flexible, based on the needs at each resource center," the teachers union said in a Sunday update to members.

The union also stressed that the shutdown is not a work stoppage; teachers would have the task of making sure that students continue to learn through online and other resources. These resources include special programming on the three major local public television channels in a partnership with PBS SoCal/KCET.

Newsom on Sunday declined to second-guess districts that choose to remain open for now.

"Many smaller districts remain open and for reasons that are perfectly understandable," Newsom said in a news conference in Sacramento.

Newsom noted that in some school systems, 80% or more of students receive a free or reduced-price breakfast and lunch. Another concern, he said, is what would happen to students with moderate to severe disabilities, who face a shortage of appropriate care. Moreover, many medical workers and other emergency personnel — who are needed to manage the health crisis — could confront a lack of childcare when schools close.

Many small and rural districts operate in communities with less of a safety net than in coastal areas, Newsom added.

The governor emphasized that the state is continuing to refine appropriate procedures for all school systems — whether open or closed.

"On Tuesday, we will be putting out very detailed guidelines for those schools that remained open and continue to remain or are likely to remain open — and those that have closed," Newsom said. "We are vetting and curating and validating all kinds of private- and public-sector solutions to address the ... obvious real problems."

Newsom also noted that some school districts simply have carried out more disaster planning than others.

The governor's message was not entirely embraced by those who favor closing all the schools without further delay, including Alex Caputo-Pearl, president of the L.A. teachers union, which had called on Thursday night for shutting down L.A. Unified schools.

"It was the right thing to do," he said Sunday. "Now we're part of the coalition pushing for all schools to close."

Sonali Kohli and Paloma Esquivel contributed to this report.